GoMotorcoach to Comic Con? Why not?

The days of a simple convention for comic book fans are long gone.  With the increased popularity of comics, science fiction, gaming and the like, the comic con has become a huge spectacle across the country.  Allow me to share a story of once comic con experience and let you know why we should have chartered a bus.

If you have ever attended a Con you know that they tend to be quite crowded with all sorts of people.  People enjoy dressing up in imaginative costumes based on their favorite characters, books, movies, etc.  This is known in the industry as Cosplay and the costumes can get very elaborate.

It was not all that long ago when my friends and I decided we wanted to attend a Con that was about a four hour drive from us.  Since none of us owned a vehicle large enough for everyone we looked at two options; charter a bus or rent a large van.  I can tell you now we made the wrong choice with the van.  If only we had spent a few dollars more we’d have had a much better experience.

First of all the gas was expensive and the fuel economy was awful in that van.  A charter bus would have alleviated our need to fork out all that cash each time we had to stop for fuel.  Although the charter would have needed to stop as well, it most certainly would have done so while we were inside and enjoying the festivities.

But that really was not even the main concern.  When we arrived the line to get into any of the nearby parking lots was longer than the lines inside to see an actor that once played a villain on an old Star Trek episode.  We arrived in what we thought was plenty of time to park, get our costumes together and start enjoying ourselves.  Instead we spent almost 90 minutes trying to park this huge van.  Nearby we could see busses pulling up to the entrance to the convention center and dropping off their guests while we sat idle.  It was frustrating to be sure, but at the end of the night the frustration was at its peak when we tried to leave and go to our hotel.  Had we just chartered a bus like some of those other groups we’d have been well rested for the second day of the Con.

However parking was not the only reason the bus would have been better.  Inside the bus there was room to move around thus giving riders plenty of room and time to get their costumes and make up done.   Instead, we had to wait in line to get into the restrooms to take care of that.  So before we could ever get started in enjoying the show and meeting the stars we had to impatiently wait for our turn in the bathroom.

A typical Comic Con can cost a lot of money to attend especially if you are the type to gather autographs and memorabilia.  And just where is everyone going to find a place for all of that in the van?  Unfortunately Dalek and R2D2 replicas takes up substantially more space than you’d think.

The charter bus experience is perfect for your group to attend a Comic Con.  You’ll have plenty of room to walk around and get ready, you’ll get dropped off right at the front door and there will be plenty of room for a few extra friends on the way home.  Add in the fact that if you have chartered a bus you can partake in a few adult beverages while enjoying the con and you have a win-win situation.  So the next time you and your friends decide to travel across the state to see 100 people dressed like Doctor Who; take the bus.  You’ll be very happy you did.

Top Movies to Watch on your next Charter Bus Trip. 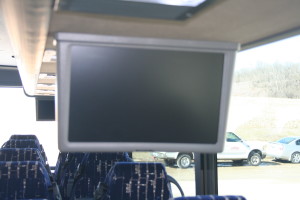 Nothing says road trip, like an awesome iPod playlist (stay tuned) and great movies to watch while on the motorcoach.  Young and old alike can enjoy these great feature films.

1.  The Muppet Movie: Nobody does a road trip like Jim Henson’s Muppets.  Music, mayhem and all kinds of silliness,  this classic movie is fun for the entire family.

2. Dumb and Dumber: Clearly not the smartest film on the list, but if you can keep a straight face as Lloyd and Harry bumble through America in their dog-shaped “shaggin’ wagon”, you need to pull over and have your funny sensor checked.

3. RV:  Who says you can’t road trip and work at the same time?  This hilarious movie starring Robin Williams will leave you laughing all the way to your destination – let’s just hope you leave your bus in better shape than they leave their RV.

4. Disney’s Frozen:  The newest hit movie from the Disney company, the film tells the story of a fearless princess who sets off on an epic journey alongside a rugged, thrill-seeking mountain man, his loyal pet reindeer, and a hapless snowman to find her estranged sister, whose icy powers have inadvertently trapped the kingdom in eternal winter.

6. Rudy:  What’s better than a feel good, sports movie where the underdog wins?  Not. Much.  That’s why Rudy earned a spot on our list.  It is an account of the life of Daniel “Rudy” Ruettiger, who harbored dreams of playing football at the University of Notre Dame despite significant obstacles.

8.  Finding Nemo:  It tells the story of the over-protective clown fish named Marlin who, along with his friend, Dory search for his abducted son Nemo all the way to Sydney Harbor.  Along the way, Marlin learns to take risks and let Nemo take care of himself.

9.  Mary Poppins:  Disney at its best.  The film, which combines live-action and animation, stars Julie Andrews as a magical nanny who visits a dysfunctional family in London and employs her unique brand of lifestyle to improve the family’s dynamic.

10.  Tommy Boy:  Knock, Knock…”Housekeeping, you need towel?” This movie is not only fun to watch, but you will be quoting it the rest of your trip.  Chris Farley and David Spade make a great team when they join up to save the Tommy’s family’s factory.