Snow, snow and more snow.  Snow is a word we are sure our friends on the East Coast or tired of hearing.  Commuters and travelers via Amtrak were encouraged to take charter buses instead.

According to ABC News10.com, “travelers going to and from Boston on the Lake Shore line wouldn’t be boarding a train at all.  “Because of some equipment issues there we have had to replace the trains with bus service,” Amtrak spokesman Craig Schulz said.  Schulz said train 448 and 449 between Chicago and Boston was stuck frozen in the Boston Railyard which is why Amtrak substituted charter buster for the Boston to Albany leg. “It’s been a rough winter no question,” Schulz said.  Despite services being disrupted and trains being delayed, Schulz said Amtrak works hard to get passengers where they need to be as safely as possible.”

Recently, there have been many instances where charter bus companies have been called upon to get travelers and commuters in and around the Northeast.  A Yankee Lines of Boston, Mass. is one of many companies that have braved the snow and ice.  Charter buses are often called upon when Mother Nature decides to throw a weather party.  They are the most versatile, economical way to get people from Point A to Point B and can go virtually anywhere there is a roadway. 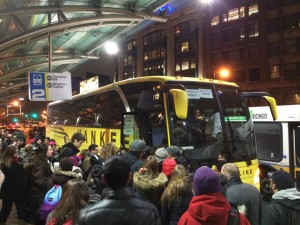 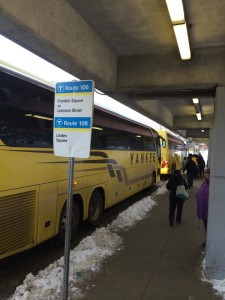